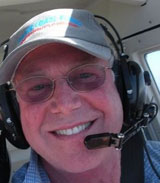 Gabriel Wisdom is a seasoned investment advisor and well-known broadcaster, who has handled thousands of investment accounts, representing over one billion dollars in assets during the last 30 years.

Over a 15 year period, he was an executive with three Wall Street NYSE Member firms (Shearson-Lehman Brothers, Prudential-Bache, and Sutro & Co.). With Michael Moore, he co-founded an Ohio mutual fund trust company which was acquired by the transfer agent, Mutual Shareholder Services. Wisdom is a Director-Shareholder of Monterey Financial, a national consumer finance company in Oceanside, CA. He currently serves as an advisor to the San Diego Treasurer / Tax Collector’s office.

Gabriel Wisdom’s broadcast career began in 1968 as a young pioneer in “Free-Form” FM radio at KPRI, San Diego.  He was one of the prominent on-air personalities for KGB-FM San Diego, and KMET-FM Los Angeles, two legendary Album Oriented Rock stations in the 1970’s and early ’80s. During his tenure at KGB and KMET, Wisdom was involved in over 100 major concerts and rock festivals.  His persona circa 1973 is portrayed briefly in Cameron Crowe’s movie from DreamWorks, “Almost Famous” (watch video segment)

Gabriel Wisdom was a frequent contributor to local and National Public Radio from 2001 to 2005. His commentaries were heard weekdays on KPBS-FM San Diego and then weekly on “Marketplace” distributed nationally by Minnesota Public Radio (2003-05). Credits include CBS Radio, KNX Los Angeles (2003-2021), and currently for Mottek on Money, KABC Radio, Los Angeles.

Gabriel Wisdom has been a Forbes.com contributor, and is the author of “Wisdom on Value Investing.” His book was translated into Chinese and by agreement with U.S. publisher John Wiley & Sons, is distributed by the government-owned China Citic Press. Presently, Wisdom writes adventure stories and holds an MA in Novel Writing from Middlesex University, London.

Gabriel Wisdom graduated from the Harvard Business School’s Owner / President Management program (OPM-Class 26) in Boston, MA., and is a board member of the Harvard Business School Alumni Club of San Diego. A longtime proponent of Executive Education, he earned an Undergraduate Advanced Diploma in Data & Systems Analysis from the University of Oxford, a Bachelor of Science in Quality Systems Management from the National Graduate School of Quality Management, Falmouth, MA., and an MBA from California’s first State Approved (1976) distance learning college. He completed the Director Education and Certification Program (Certified Director) at UCLA’s Anderson School of Business.

He has three daughters and is married to Diana Weiss-Wisdom Ph.D., a licensed clinical psychologist. For fun, he flies airplanes and is an FAA Certified Flight Instructor. Gabriel and his family live in Rancho Santa Fe, California.